FOR ALL INFORMATION PRE-2015 VISIT:

Including live relays to the cinema, I saw 31  theatre productions in 2018. Over a third were of five star standard (in my opinion) but I gave only two stars to a higher proportion than usual -  and some of them,  like The School of Rock,  The Cherry Orchard and Little Voice, had been praised by the critics!

During a week's visit to London in February I saw five shows, the most entertaining of which was Everybody's Talking About Jamie. John McCea as Jamie    gave a superb performance   in his West End debut.  Mary Stuart, in which  Juliet Stevenson and Lia Williams  took Mary or Elizabeth on the toss of a coin, was riveting. The idea may have been a gimmick, but I couldn't imagine them playing the  roles the other way round to the way I saw it -  but would have loved to have been able to. I have never been impressed by Jennifer Saunders but she won me over with a great comedy act as the Duchess of Berwick in Lady Windermere's Fan.

I can't understand why The Last Ship has not transferred to the West End - I saw it at Liverpool and thought it was wonderful. The music was very good  and Richard Fleeshman proved again what a charismatic stage performer he is. His rendition of  The Pugelist left me with tears rolling down my cheeks!

Our fourth year at the Pitlochry Festival was a bit of a disappointment. There were some odd choices of play and even Chicago was a little under par - although Mister Cellophane, sung by Alan Mirren, was  the best I've heard it done.

We saw two of the UK's few remaining seaside shows: Starshine at Babbacombe(last visited in 1963)  and That's Entertainment at Eastbourne. The latter had a more talented cast and was way ahead in production values.

It was good to  be able to see live theatre transmitted to our local cinema. The Royal Ballet's Manon and La Bayadere were excellent. I was also impressed by   Ballet Theatre UK's performance of Sleeping Beauty.

My granddaughter, Sissy, sang beautifully as Blousey Brown in Bugsy Malone with  St.Ives Youth Theatre. She also had a role in the National Youth Musical Theatre's  Legend of Sleepy Hollow (an excellent show) which was put on  in the West End. It was also great to see our youngest granddaughter, Dixie, in two amateur shows in Southwick, Brighton.

I added two more theatres to my list of the ones I have visited in the UK and around the World. They are the delightful Royal Hippodrome in Eastbourne and the Dome in Brighton. The latter, converted in Victorian times from the Prince of Wales' stables, is an amazing building with a Moorish exterior and an Art Deco auditorium. For a full list go to http://www.kenford.me.uk/page57.html

I saw many excellent productions this year and only a couple of disappointing ones.

Matthew Bourne's The Red Shoes was highly inventive; had exciting dancing (especially by Ahley Shaw); great design and a wonderful choice of music composed by Bernard Herrmann. Six could not have been more different but was also a superb show. To write a musical about Henry VIII's six wives in the style of a 'girl band' pop concertwas a stoke of genius.

I like seeing a new approach to musical theatre and so it was good to see The Drowsey Chaperone performed by a local amateur group. It was very enjoyable. An older style of show, Gypsy, didn't work very well in the round at the Royal Exchange. However the performances saved it especially that of Melissa James who was mesmerising in her role of Louise/Gypsy Rose Lee.

Tay Bridge at Dundee Rep was a very cleverly written play and a great production in all respects. That night it just happened to be the 80th anniversary of the company's foundation and the theatre was full of ex-Rep actors. We were all invited to post-show food and drinks in the bar!

Five of the six shows at the Pitlochry Festival Theatre proved to be a better choice than the ones on last year's programme. The exception was Summer Holiday where the bus was a small model carried around by the actors. When I saw it some years ago in Blackpool there was a full sized bus on stage.

It was a unique experience to see Murder in the Pilchard Cellar at the 30 seat Boathouse Theatre in St. Ives, Cornwall. Two actors played six parts on a stage not much bigger than a hearthrug - fun, but not high drama!

In the other St. Ives, in Cambridgeshire, our granddaughter, Sissy, played the lead in 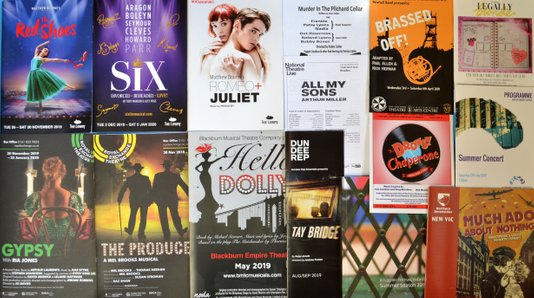 Legally Blonde to great acclaim. Another relative, my niece's husband Robin Simpson, was outstanding as Benedick in Northern Broadsides inventive production of Much Ado About Nothing.

This year I added three more theatres to my list of the ones I have visited in the UK and around the World. They are the Duchess in Long Eaton, Dundee Rep and the quirky Boathouse Theatre in St.Ives.